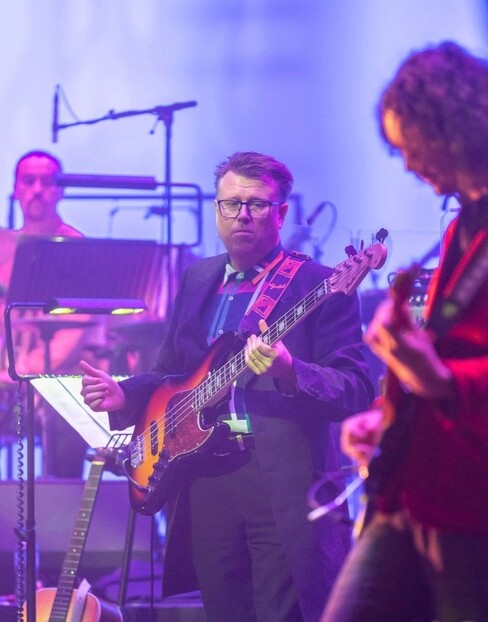 Adrian Stuckey has been involved in the professional music industry in NZ and internationally since the 1980’s. He has made a significant contribution, as a performing artist who started out playing on the North Island pub/club circuit until today as a performing and composing artist in NZ and Australia.

He founded Big Note Productions Australia on the Gold Coast in the late 90s recording and producing local artist releases.
In 2002 returned to work in Auckland for a time, founding Legend Records with NZ music Icon Alastair Riddell recording and producing local NZ artists.
During the time back in New Zealand, Adrian composed music for Disney's 'Treasure Island for Kids' and the original soundtrack for the TV special regarding acclaimed NZ rugby All Black team member- ‘Jonah Lomu- Dare to Dream’.
He has also produced, engineered and played as session musician for an album by ‘Pounamu’- international touring Maori Performing Arts Group, released through EMI. One of the tracks, ‘Timatanga’, from the Pounamu album was chosen as the New Zealand track for the International World Cup Rugby album 2003.

Joining forces with Eddie Rayner (Split Enz) on numerous projects, including Assistant Music Director for the TV show NZ Idol series. Together with Suzanne Lynch, (The Chicks) and Eddie Rayner, they comprised the musical team for ‘NZ Idol’, 2004 – 2006. Adrian joined Eddie in remixing and mastering the Split Enz back catalogue and mixing the Live recording of 'Split Enz -'one out of the bag' tour in 2006.

Returning to Australia in 2006 and it was back to writing/recording and producing music and jingles for TV (Prime and NBN Gold Coast) and educational projects for children. Several of Adrian’s jingles received nominations for the Australian Sunny Awards. Adrian has played/produced/engineered a variety of styles from jazz to classical, Aboriginal to Calypso, rock to pop. He is a music award recipient in Australia many times over for his own original music composition and production writing music for movies, such as: ‘The Universe’, for Proton Films, Australia.

Back in 2001 he began working on songs for his own album. Several radio stations around NZ and Australia including ‘Homegrown’, on National Radio, NZ and Radio Cool Blue in Auckland and 91.4 on the Gold Coast play tracks from his debut album, ‘Rhythm of Love’, receiving a positive response both from the announcers and the public.

In 2018 back in New Zealand again, Adrian collaborated with Eddie on the latest project joining forces with Mark Dennison (Sax, flutes and clarinet), Patrick Kutze (Drums) and John Kempt to record and produce original contemporary music as the band 'Double Life'.
Many of these tracks have now been masterfully sculpted by singers Andrew McLennan (Snoid) and Tim Finn into songs to be included in their current album projects.