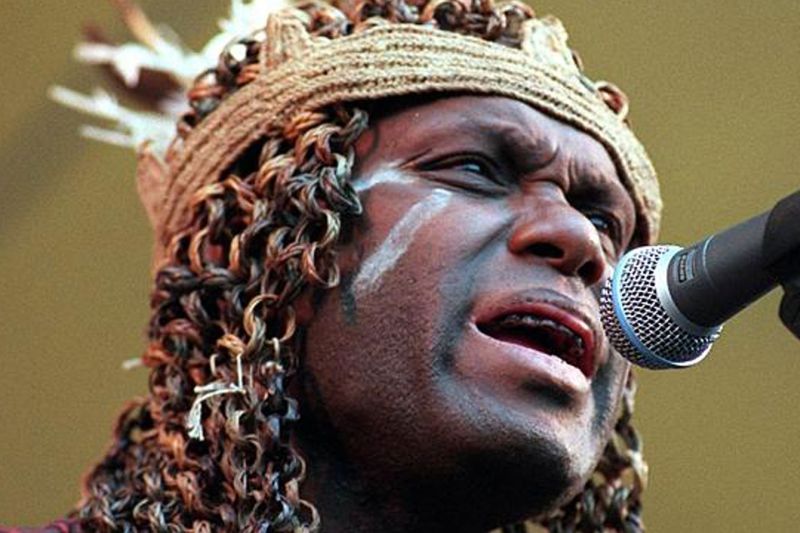 ​Telek is a band, a man and, in some parts of the world, a legend.

George Mamua Telek, or Telek as he is known to his legion of fans in Papua New Guinea, has long been at the forefront of the PNG music scene.

Telek comes from the village of Raluana, near Rabaul in the Papua New Guinean island province of East New Britain, where he continues to live with his wife Bridget and their seven children, despite the volcano which destroyed the idyllic Pacific town in 1994. “The traditional songs are about our daily life, songs that the people sing when they pick the bananas or collect the coconuts or go fishing,” he says. The towns and villages have now been rebuilt and because the Tolai people represent a living tradition, the volcano too has now entered their songs.

Telek’s songs and his haunting voice, traverse many musical styles perfectly capturing the spirit of the proud cultural heritage of the Tolai people of Papua New Guinea. Songs of the “midal” (magic charms) and “malira” (love magic) draw on Tolai culture blending contemporary grooves with Melanesian rhythms, enriched with textured environmental sounds. Rich and unique three-part harmonies are sung both in the Tolai language of Kuanuan and in a creole called Tok Pigin. Telek also delves into Stringband Music: a rich blend of guitars and ukeleles sitting beneath interwoven vocal lines and harmonies in a unique gospel/country folk style that is typical throughout the whole of the Pacific. Telek and his musical peers in the Rabaul music scene also immersed themselves in a steady diet of Bob Marley, Chuck Berry, the Stones and the Beatles and the NDW lads introduced George to the atmospheric grooves of Massive Attack and Talking Heads and you can hear elements of all of these artists in Telek’s writing

But back to the history Telek began singing in the late seventies with various stringbands including The Moab Stringband and The Jolly Roger Stringband, before joining rock band, The Kagan Devils. After a brief spell in the PNG capital of Port Moresby, Telek returned to Rabaul to join The Unbelievers Revival Band where he began writing his own songs including “Talaigu”, which remains a highlight of his live set. But the breakthrough was to come with the rock group Painim Wok (it means “looking for work”). Painim Wok was PNG’s biggest rock band in the 80’s and sold all over the Pacific. Featuring the wild guitar of their leather clad guitarist John Warbat and Telek on lead vocals, Painim Wok at one stage they had three songs in PNG’s top ten at the same time. They released eight albums in the 80’s. All of these records were top sellers.

The chance to reach a wider audience occurred in 1986 when David Bridie from the Australian band Not Drowning Waving was on holiday in Papua New Guinea and heard a tape of Telek playing with The Moab Stringband. “It was a booming local scene. Groups from Rabaul were successful throughout Papua New Guinea, both rock bands and string bands. I bought a couple of George’s tapes and they were instantly appealing, though unlike anything I had heard before”. We met up over a few beers and decided to work together to try and get his music heard outside Papua New Guinea,” recalls Bridie.

Bridie returned two years later with Not Drowning Waving to record an album with George and other Papua New Guinean musicians – including drummer Ben Hakalitz from the Sanguma Band and Glen Low from “Barike” who, like Bridie, still plays with Telek. The album they made together, ‘Tabaran’, was released in Australasia in 1990 – the first popular collaboration between Australian and Papua New Guinean musicians. Somehow it also found it’s way to the discerning David Byrne, who declared it his favourite album of the year.

Peter Gabriel was equally impressed and after George had made his first tour outside Papua New Guinea supporting Not Drowning Waving around Australia, he was invited to appear at Womadelaide in 1992. He also forged an alliance with Australian Aboriginal artists such as Archie Roach and Kev Carmody. Both later appeared on his first solo album to be released outside Papua New Guinea, 1997’s ‘Telek’ on the Australian label ORiGIN. It won an ARIA as Best World Music Album and was labeled “…one of the best world releases this year.” by Rolling Stone .

In 2000, George was invited by Peter Gabriel to record at Real World with a band consisting of Ben Hakalitz on percussion, David Bridie on keyboards and fellow Papua New Guinean Glen Low on bass. “To work at Real World was very special. The studio was fantastic to work in – a beautiful setting to record my music. We did a lot of work on the vocal harmonies, layering up the sound, which has worked very well. For island people, the opportunity to play our music for the rest of the world is something we never even dreamed about.”

“Serious Tam”, produced by Bridie and Vic Coppersmith Heaven (whose claim to fame is that he produced all of The Jam’s records), and the first from PNG to be released in the Northern Hemisphere, ensures Telek’s rightful place as one of the most engaging performers in the Pacific region. “The title track Serious Tam is a love song” Telek explains. “It is a mixture of the English word “serious” and the Tolai word “tam” (you) so it means I’m serous about you.”

His follow-up album ‘Amette’, was released in 2004 and his most recent album Akave was released through the Wantok Music-label.
​