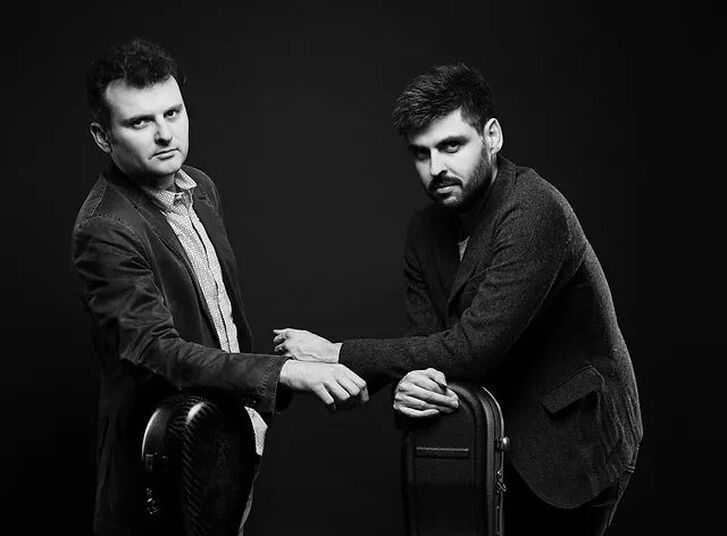 Guitarists, Slava and Leonard Grigoryan are counted amongst the finest musicians of their generation having developed a reputation for enthralling audiences with the energy of their performances and the breadth of their repertoire – embracing genres such as classical, jazz and contemporary music from around the world.
​
Between them, they have received 3 ARIA awards (Australian Recording Industry Association) and an incredible 24 ARIA Award nominations. As a duo they have recorded 12 albums.
​
They have been touring internationally since 2003, regularly performing throughout Europe, Asia, Australia and the USA, as well as more exotic performances in Brazil, South Africa, India and the Middle East.
​
Their diverse repertoire continues to present new opportunities for performances in traditional and unconventional settings, from projects with orchestras to duo performances in iconic classical venues such as London’s Wigmore Hall and Vienna’s Konzerthaus.
​
Their ability to perform in disparate genres has resulted in invitations from arts festivals, jazz festivals, folk festivals and Womad, as well as performing in more intimate spaces such as clubs and salons.
​
Testament to their broad appeal and incredible skills is reflected in their most recent tours: In August 2017 they performed as support for the Canadian singer/songwriter KD Lang on her Ingénue Redux, 25th Anniversary Tour. This was followed immediately by another National tour sharing the stage and billing with the great Flamenco guitarist Paco Peña. All of this occurred while their classical release ‘Songs Without Words’ was at the top of the classical music charts for over 3 months.
​
​Slava and Leonard are blessed with an uncanny ability to perform so seamlessly as a duo that they play and ‘breath’ as one. Growing up and performing together does not guarantee a symbiotic relationship, but what does create the perfect storm is the mutual respect and admiration the brothers have for each other. Perhaps this is the intangible quality that creates their ability to connect with listeners.
​
Slava & Leonard Grigoryan’s deep appreciation of a broad spectrum of musical styles has resulted in many collaborations involving music, both written and improvised. Combine this with their classical training and the result is a unique sound incorporating all these influences.
www.grigoryanbrothers.com | upcoming concerts | facebook | instagram | spotify |

Praise for the Grigoryan Brothers

“Guitar playing of uncommon originality and authority. Musicality, expressivity and daring,”
– The New York Times
​
“A centrepiece of the 2016 Uppsala Guitar Festival (Sweden) was the appearance of Australia’s Grigoryan Brothers. Their first of three performances revealed two guitarists equally comfortable traversing the worlds of classical music, jazz and beyond.”
– DownBeat

‘Their ability to play as if drawing from a shared musical consciousness and their subtle nuances of tempo, bordered on the uncanny’.
– The West Australian

“The Grigoryan Brothers have a reputation of performing together so emphatically, they become extensions of each other.”
– Courier Mail